Fuel for drivers. Why G-Drive does everything right

Savvy marketing does not always help, but it certainly never hurts. The universal rule that brings to life an infinite number of brands, promotion campaigns and rebrandings of virtually anything around us. It works in the fuel segment, too — the most striking example of it is the G-Drive: a brand under which merged a premium fuel for cars and an energy drink. Any fan of «Zenith», as well as any active Internet user was faced with a G-Drive advertising campaign: the famous Hulk during training sessions performs exorbitant power tricks – tears the ball apart, or does the same to the net, then makes his colleagues looks like extras in game situations. 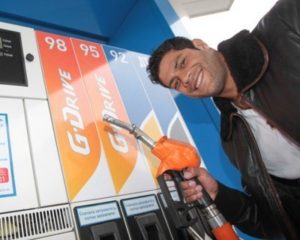 It’s all done in a spectacular way, with humor and enthusiasm. I think many were under the impression of these excellent viral clips and discovered G-Drive energy drink, having tried it at least «just for fun». And it is very representative: at the basis of an integrated approach to the promotion lies absolutely correct idea, or rather a few ideas.

First one — the driver and the car as a whole — if you feed your «iron horse» with fuel, which increases its performance, leading it to the next level, you yourself need to be fit as its «rider» which has to tame the roaring engine and reckless wheels during the long journey. Therefore, everything is simple and logical: filled your iron horse with some super fuel? Fill yourself with the same super-fuel, otherwise it’s a dissonance.

Second one: today, for many people the driving is, in fact, a kind of work. Even if they do not perceive it as such an activity. Trips to work or while performing work-related errands, family business, going to countryside cottage, going fishing, shopping trips, traveling on vacation etc. Some significant distances are being driven, which requires from motorists some professional level of concentration, reflexes’ speed and general «fitness». Add to this the features of our traffic situation, especially in large cities, driving culture of citizens, etc. Arm yourself with an additional volume of freshness, attention and reaction, you will need some here. In the Northwest you may add climate issues and seasonal influences: about 7-8 months of the year we all dream about a magical means to stimulate the body, especially in the morning, and the coffee is not always enough. That is, the driver’s job should be provided with the appropriate working conditions. Period.

The third factor — the gas station as an ideal location for the sales of this class of beverages, which are the most convenient to be encouraged via single brand and a single identity. Traditional retail, especially supermarkets, does not work this well in promoting energy drinks — after all, it is a common channel of strategic purchases for the households, while it is better to sell this kind of drinks as being «specially designed for the drivers» and sold at a specially designed driver’s place. In this regard, a single «car brand» for this range of products will help in the event of the introduction of ban on the sale of this class of drinks — it is clear that the purpose of the law is alcoholic energy drinks, but who knows, whether under its scope will fall some really good stuff.

In this case, the association of energy drinkswith the «driver’s gear», their inclusion in the range of self-evident products at gas stations can only help the development of the segment and protect it against excessive restrictions and regulation of the future.

Today energy drinks makes only about 1.5% of the total volume of soft drinks in Russia (Nielsen data). At the same time, in the wake of the popularity of customized solutions, «sports nutrition», «revitalizing the power» etc.) they have a huge potential for growth, and the G-Drive initiative in terms of branding can stimulate the development of the whole segment, having withdrawn it from the associations with not very high-quality and healthy drinks.

«Functional foods» with additional useful functionality are a very 21st century solution in terms of positioning,. For example, look at the Japanese market, where special food and drinks for every occasion of life are gaining popularity literally every month and multiply like popcorn in a pan.

So far we are seriously lagging behind the West in terms of consumption of commercial soft drinks in general, not to mention the energy sector. The reason — the low level of understanding of how and why this class of products actually good for. In Europe and the United States the average citizen drinks about 100 liters of commercial soft drinks without alcoholic beverages a year. In Russia in the early 2010s, this same indicator did not reach 50 litres.

Menwhile, according to the BusinesStat forecasts, from 2013 to 2017 the demand for functional drinks (including energy ones) in Russia will grow by 2.7-3.5% and in 2017 the market will amount to 2.2 billion liters per year. Euromonitor International estimated sales increase in the money for the next 5 years up to $ 3 billion.

According to Marketing Index research energy drinks are consumed by more than 20% of adult Russians. Moreover, very much in the same way as it happened previously in Europe and the United States, channels of distribution of these drinks and their general perception as a satellite of club and bar amusements are changing. Drink with the effect of increasing the length of vivacity by 3-4 hours in itself is an interesting product that will be appreciated by many categories of citizens in various fields of activity. The drivers here take one of the most important places.

Thus, under conditions where the composition of these drinks is about the same, the pivotal role is being played by…competent promotion and proper positioning.

G-Drive in this area is close to the ideal, given that analysts tend to evaluate the modern Russian market in this area as a friendly for the future emergence of the new players and their advancement in narrow segments, despite the overall dominance of the giants — Red Bull, Adrenaline Rush, Burn, Red Devil, etc.

Who knows, maybe in the near future we will see a surge in the segment of «fuel for drivers» from the other players of the domestic fuel retail? From my point of view, it would be just logical, given the steadily increasing role of non-fuel sales at the facilities of this class.

P.S. I am a supporter of practical consulting, so the portfolio of RusHOLTS has successfully implemented projects under the title «Development and organization of production of energy drinks under a single brand with fuel at gas stations chain of the federal scale». A «standard» result of the implementation of such projects in the first six months: sales of private label energy drink hold 50% of sales of the entire range of energy drinks sold in gas stations chain, becoming one of the most effective marketing support of branded fuel. The experts figured out what I’m telling you. )))

That is why using the same name for the «fuel» for the drivers and for the cars is a cool piece of marketing thinking.

Fuel for drivers. Why G-Drive does everything right
Under the brand G-Drive are combined a premium fuel for cars and an energy drink. «Functional foods» with additional useful functionality are a very 21st century solution in terms of positioning,. For example, look at the Japanese market, where special food and drinks for every occasion of life are gaining popularity literally every month and multiply like popcorn in a pan.

Life after oil. The transformation of the gas station