In the US, the brands of major oil companies are being gradually squeezed out of the retail fuel market. One of the main reasons — the process of the drivers’ «refueling» with the food has become almost more important than actual fueling cars with gas.

Previously, all the attention on the highway was focused on the search for the Shell, Exxon or Texaco signs, whereas now the drivers are looking for Buc-ee or Wawa ones in the roadside landscape. Millenials rate filling stations for their food quality in no lesser degree than thry do in terms of the price and quality of gasoline. 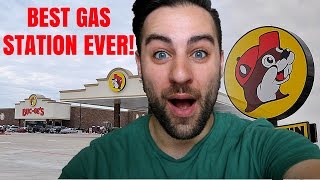 The combination of the power of the recognizable fuel brand and new trends in consumer behavior makes it possible to get the result in the form of improving the quality of service and increasing profitability in a highly volatile and competitive business like today’s retail fuel sales.

«Regardless of the operating model, the key to its success today is the brand itself», — says Istvan Captaini, executive vice president of retail Royal Dutch Shell, outlining the overall strategy for this market. In the US, his company is a partner of Circle K, which allows expanding the market for the sale of fuel under the brand Shell through the partnership with the second largest network of C-stores in North America. Gasoline and groceries both are accounted for in the Circle K loyalty program.

Exxon Mobil Corp. has similar partnerships with Circle K and 7-Eleven Inc. The strategy and benefits for the end user are identical to Shell’s: buying more products and more fuel will get you more discounts and bonuses. Everybody wins.

To be honest, the retail sales of gasoline alone have never been something extremely profitable for large oil holdings in the US. The profitability of these sales is cents per gallon, in the United States everyone has known for a long time that the margin at the gas station exists in related sales, even despite the fact that only in July the country sold $ 38.7 billion of gasoline through retail.

Realizing this state of affairs, many large energy companies started to diminish their participation in the final stages of the sales process to the consumers to the level of franchise management in order to focus on oil production and processing. The formed space began to be filled by the large retail networks that quickly realized the potential of the offer to the drivers of the » one-stop-shop service» principle to cover all the issues that typically arise along the way from point A to point B.

In 2014, the five largest US oil companies owned only 0.4% of the total number of gas stations in the country, although in 2008 it was 1.9% (NACS data). Most stations with logos of major brands such as Exxon, Chevron Corp. and BP actually belong to individual entrepreneurs or networks of small stores on long-term contracts with the oil company ensuring the supply of the fuel and the right of sales under its brand!

As a result, 7-Eleven and Sheetz Inc. chains in 2015 accounted for more than 80% of gasoline sales in the USA (from 59% in 1997, according to the same NACS data). And most of the remaining 20% have been sold by large retail chains- Kroger Co., WalMart and Costco Wholesale.
NACS Vice President for Strategic Industry Initiatives Jeff Lenard describes the shift in the industry as a substitute for people buying a sandwich because of the attractive price of gasoline for people buying gasoline because of the good quality of the sandwich they havee been offered.

The number of consumers who say that gasoline prices affect their choice of place of refueling fell by 6% since 2015 and reached 51% of the number of all gas station visitors. Today in the United States the choice of the refueling place depends on the quality of food offers and on the level of gasoline prices absolutely equally, emphasizes Lenard.

Since it is often impossible to build sales based only the attractive price of fuel, many chains are making additional efforts to develop non-fuel businesses — RaceTrac and QuikTrip are modernizing their offer in the caf? area. Fresh food, including trendy positions far beyond sandwiches, now are being served to the customers at these stations.

7-Eleven launches advertising campaigns for its signature beverages Big Gulp and Slurpee, and Wawa Inc. develops a new line of sandwiches. Not a word about gasoline.
Joseph Leto, president of Energy Analysts International, adds that since 2012, about 20,000 gas stations with mini-markets have closed in the country. As he says they all relied too much on fuel sales and did not develop sales of «by-products» that already have long ceased to be an addition to gasoline and other purely automotive products.

Big retail chains also played a role in this process: WalMart and Costco began to open the gas stations in the same space as parking lots in their malls, adding an average of 28 new gas stations a month in 2016. 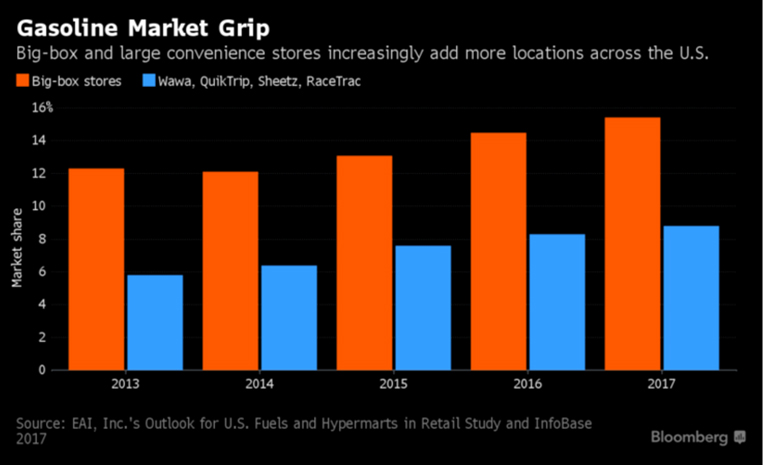 Those oil companies, which still remain in retail, also think far beyond fuel — Refiner Marathon Petroleum Corp. plans to spend $ 380 million to develop a network of mini-markets Speedway in terms of expanding sales of products under its own brand (private label).

QuikTrip, the operator that sells 2.5% of the fuel in the country, expects to increase sales at its gas stations/mini-markets so that their non-fuel revenue would provide at least 25% of the company’s total revenue structure.

In 2016, according to NACS, food sales in mini-markets at gas stations accounted for 22% of total revenue, as well as 35% in gross profit structure. Both indicators set record for the whole history of the industry. «Quality of food» is in the top three factors of the choice of gas stations along with fuel prices and stations’ location. Moreover, even hot dogs and coffee are often not enough. Trends are in the healthy food, fresh ingredients and premium quality products.

Level of food projects at the gas station

Hence there’s a lot of local stories about gas stations with miracle meals, which is cooked by a dedicated staff of cooks, for example, migrants from India who offer something far beyond a burger, like a full-fledged chicken curry, the level of national cuisine restaurant. Such establishments quickly become a local landmark and to fight them with donuts or croissants heated in a microwave oven is a lost cause.
Also, it is quite difficult to run a food project from scratch in an area where a fast-food competitor of a good level already exists. It is easier to find a gas station without a food component and to integrate there as a puzzle element of the future joint success. The gas station has a guaranteed volume of foot traffic. One can say that it is kind of «embedded» in the very eco-system of gas station, whereas people may simply ignore yet another diner on the road.

The average volume of foot traffic at the gas station and the adjoining mini market/diner is about 1000 people a day. A guaranteed thousand visits is the dream of any small-format store! It remains only to let customers feel that you have something tasty to offer them, and here they are, sales.

In the state of Indianapolis, the described model is booming — local non-network gas stations attract inexpensive hired labor of chefs from abroad, giving them the freedom of creativity in the kitchen and offering customers unique bonuses when refueling in the form of pork in masala sauce, lentil flour pies and other delicacies along with pizza, gyros and samosa.

Betting only on cigarettes, chips and «Doctor Pepper» kills the business of gas stations in modern America, if it is not backed up with a full-fledged gastronomic offer. Today, this is the reality of the American fueling industry, which regularly forms new symbiosis of gas stations and fast food, sometimes so successful that they are the subject of copying by the world’s leading players in the fast food industry.

Gas stations of the future: welcome to Beijing